Posters, Wallpapers and Rating are missing

Sometimes movie/tv-show posters and/or wallpapers are missing in detail screen and/or in small grid.
Rating is completely missing.
Clearing cache fixes at least the first issue for a day. Then it happens again… 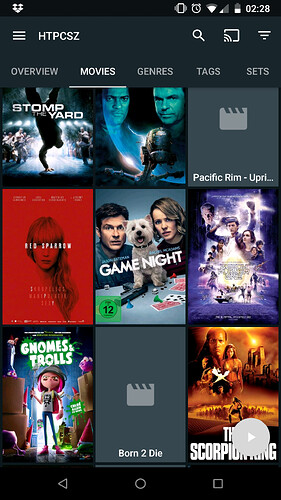 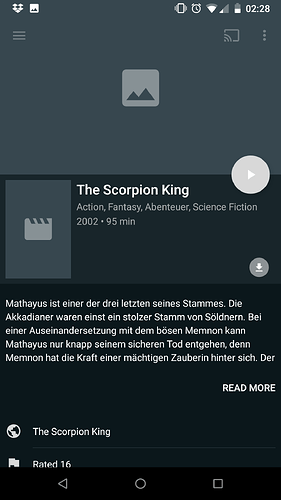 1 - Then Kodi no more sends it correctly

Upload your myvideosXX.db in another issue.

2 - Is your device rooted or have app optimized installed?

Of course check that you have not checked the option show mpaa instead of ratings.

The issue about the missing rating is done. Somehow the “User rating” was checked in the settings. Because there is no user rating, the imdb rating was replaced by an empty string, obviously. After unchecking user rating, it works. Thanks for the hint to check this!

Now the only issue is the randomly missing posters/wallpapers.
Yesterday I cleared the cache, now the issue is back again. Some less newer videos are now without poster/wallpaper suddenly. If I scroll down in my list, after ~10% of scrolling, it looks like that every ~second poster is missing in the small grid. If I change to e.g. grid, even more movies miss the poster. Really strange.

P.S. Forgot to tell you that I am beta user and I am using the latest version of Yatse (however this issue exists already for some weeks).

Well you have something that delete the cache as you are probably low on disk space.
This can happens and Yatse just download the image again.

I have no real idea about the issue, can be some tools that block access or delete while Yatse tries to write.

Nah, my phone got 7gb left. So there should be no issue regarding space.

It is super interesting how random the posters are appear or disappear.

One example: 00:47 Hitch is visible, after scrolling down a bit, it vanished suddenly (00:49) and when I go back again (scrolling up, 00:52) it is visible again - however if I open the detail view of Hitch, the poster is still gone.

Same for pathfinder (first row). The funny thing was: After this video, I opened File Manager and checked for the cache-folder and searched for the path-finder poster. After I found it (!), I went back to Yatse in to the detail view of pathfinder… And voila, the poster appears then… Not sure if there are relations to this…

Since then, I removed ccleaner and also added Yatse to the exception list of android’s optimization list. Maybe something goes wrong, when Yatse is scanning/crawling in background and Android kills it, because it wants to sleep… Just testing.

Because I also deleted the cache, I cannot say if it is working now or not. Not yet, I will report when there are new discoveries.

What do you think about the video?

Yatse can handle kills and everything without an issue.

Your logs where very clear, the image was not present in the cache according to the OS and Yatse was not able to write it to cache again according to OS.

So there’s something outside Yatse that prevent it from doing it’s job, if it was an issue with Yatse the logs would be different as unable to decode or download the image, here all are tied to low level disk access.

Your test for path finder is quite strange. Does your device have external SD card? Have you moved the Yatse cache folder in settings or moved the app to SDCard at OS level ?

Unfortunately, the Nexus5X does NOT have an SD card slot.

“Yatse was not able to write it to cache again according to OS”
I am not sure if this is correct, you will see it in the next video (looks spooky):
https://ufile.io/ful39

The idea behind the video: Posters are not visible in Yatse, leave App does not fix it. But if you browse to the directory where the posters are (actually they are there!!!) and you read (from) the images via another app, then the posters appear also in Yatse.

I had developed a lot with Android in the past, but sadly not in the last 3 years… Maybe there are some other issue, like access/reading restrictions?

Will all due respect I do

And maintain Yatse since 7 years for millions users and kept the 4.73 rating

I’ll let you read the log errors. And there’s no random permissions errors in a common directory

@eusi please contact me by mail I’ll send you an APK with logs at another point to get another error.

But there’s definitively something on your device. The fact that the images are here would mean that the OS returns an error on save and lock the file until someone else access it. Could understand on Windows with AntiVirus but on Android don’t know how it could be possible without root.

A post was split to a new topic: Leia missing Images