Jellyfin music albums out of sync

Firstly, I’m a long time Yatse user, so thanks for creating and maintaining such an excellent app!

I have a minor issue with the Jellyfin music database synchronisation. The problem is that certain albums have become out of sync with Jellyfin - for example in Yatse an album shows up as containing 2 tracks but it actually contains 5 tracks. I’ve forced a re-sync of the music database multiple times but the issue persists. Given the speed of the sync, I have a feeling that you have implemented support for partial database updates in Jellyfin (e.g. you ask the server “send me everything that has changed since X”). Is there anyway I can force a full and complete sync of the music database from Jellyfin into Yatse? Hopefully I’m not missing something obvious!

Example of the issue: 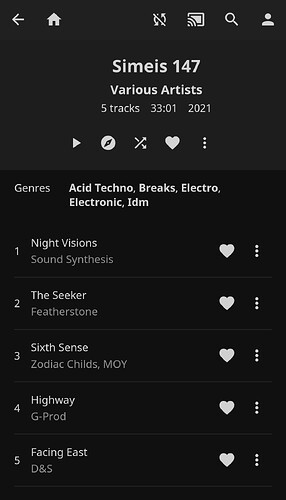 How to get debug information and open a proper issue

Yatse have a powerful log system that can be enabled to gather all needed information when something goes wrong.

Thanks for the quick response. I’ve generated a debug log and sent it to @Support.

Do you know if the “wrong IDs” has been raised as an issue on Jellyfin’s GitHub?

Ok so your issue is way simpler than that

Click the top right filter icon and uncheck it.

Sorry for wasting your time and thanks for the great support!